Most of my Christian friends share a single common problem: they all fret with their ability to discern God’s will for them. In simple words, they worry that they will not hear the voice of the King calling to them. 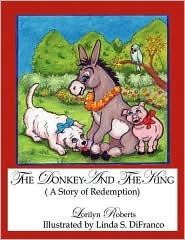 In brilliantly colored drawings and simple words, the book The Donkey and The King helps children aged two through seven learn to listen for the voice of the King. The central character, a donkey named Baruch, grows weary of a feeling worthless. He sets out to seek a better life. Other characters with names reminiscent of the characters in Bunyan’s Pilgrim’s Progress attempt without success to keep the determined donkey from his quest.

At Baruch’s darkest hour, discouraged, cold and afraid, a messenger from the King finds him. When the messenger tells Baruch that the King wants the little donkey to join him in the beautiful garden, Baruch is doubtful. The donkey then learns that in order to enter the garden he must pass an angel with a flaming sword, an angel who only allows entrance to those who hear the voice of the King.

Baruch feels deeply discouraged. “I’m not a very good donkey,” he says. “I don’t think I could hear the King’s voice.” The adventurer who so daringly opened the gate to his pen and ran away immediately recognizes that he is unworthy to be noticed by the King and actually fears that the King is angry with him for being so disobedient. Believers of all ages will recognize this problem. Everyone needs the encouragement the King’s messenger gave to Baruch to believe that the King loves him and will call him into the garden.

Bright, colorful pictures will keep any child’s attention. They tell the story beautifully without words. At the end of the story is an image reminiscent of the famous “Good Shepherd” painting. Baruch learns that even though he thought he could find happiness by himself, he really needed to be found by the King. Parents who want to teach their children to know and love the King of Kings will love reading this story aloud as much as their children enjoy hearing it.

I received this book at no charge for the purpose of reading and reviewing it. I was not obligated to give a positive review. This review is my honest appraisal of the book.